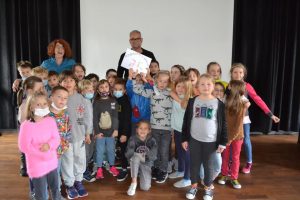 October 12, 2021 – prof. Maciej Kurcz visited the Juliusz Słowacki Primary School in Cracow. He met with the pupils and talked about how Sudanese children spend their time, what their school looks like, what their daily duties are. During the following lessons, the pupils made postcards from Cracow with greetings for the children from Soba and gave recorded a song that everyone sang at the end of the meeting. 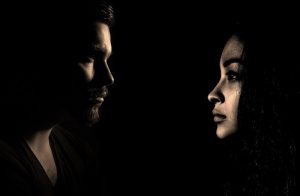 On the 10th of October 2021, prof. Maciej Kurcz gave a presentation entitled “Aioba destroyed Soba‘ during the Silesian Science Fair in Katowice.

In cultural memory, each end (of the kingdom, dynasty, epoch) in history is often associated with some extraordinary story. Frequently it takes the form of a legend wrapped around the characters who directly led the ‘old world’ to destruction, thus assuming the role of a mythical scapegoat. It is enough to mention, for example, the history of Troy and Paris, but also our liberum veto and the nobleman Siciński. The collapse of the Nubian medieval kingdom of Alwa – located at the confluence of the White and Blue Nile in North-Eastern Africa – had a dramatic end and was associated with one person – a woman named Aioba. According to oral tradition, the fall of Soba – the capital of this once powerful Christian kingdom – was committed by a woman who, by deception and allegedly the weapon characteristic of every woman (‘cupid’s arrows’), committed a bloody deal with the ruler and his court. Should we really treat this story as historical? What does this folk tale really tell us? These are the questions that I will try to answer. The lecture is related to my current ethnoarchaeological research in contemporary Soba – a city on the outskirts of Khartoum, the capital of Sudan.

On the 9th of September 2021, during the 14th International Conference of Archaeological Prospection (8-10.09.2021, https://icap2021.sciencesconf.org/), Robert Ryndziewicz will present the results of a large-scale geophysical survey in Soba.

At the conference entitled ‘Digital Crossroads’ (14-18.06.2021), organized by the Computer Applications & Quantitative Methods in Archeology Association (CAA), Mariusz Drzewiecki presented a paper entitled: ‘Potential of satellite imagery analysis for archaeological heritage studies and management in the suburbs of Khartoum (Sudan)’. The recording of the presentation can be viewed at https://youtu.be/sQzcNNMQ-XY?t=2258 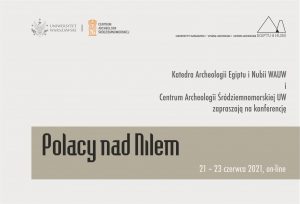 Mariusz Drzewiecki – ‘Studies on the spatial organization of the medieval Soba – concept, first results, and perspectives’;

The introduction to both papers can be found on the website Poles on the Nile (http://polacynadnilem.uw.edu.pl/misje/sezony-2019-2021/polskie-misje-w-sudanie-w-sezonach-2019-2021/soba-organizacja-przestrzenna-sredniowiecznej-stolicy-nad-nilem-blekitnym/). 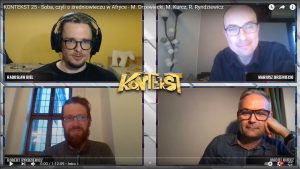 We invite you to watch the webinar “Kontekst” prepared by the editors of “Archeologia Żywa” (Polish popular science journal) on the subject of “Soba and medieval Africa”. The meeting took place on May 6, 2021 and was attended by: Radosław Biel (editor of Archeologia Żywa), Maciej Kurcz (ethnologist from the University of Silesia), Robert Ryndziewicz (geophysics from the Polish Academy of Sciences) and Mariusz Drzewiecki (archaeologist from the University of Warsaw). 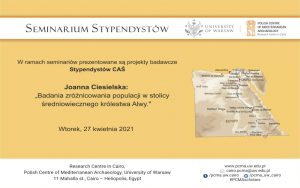 On the 17th of April 2021, the seminar at the PCMA UW Research Centre in Cairo featured research by PCMA scholarship holder Joanna Ciesielska. She presented on the subject of ‘Preliminary investigation of population diversity in the capital of the medieval kingdom of Alwa’.

Abstract: In the sixth century CE Nubia, approximately the territory of modern northern Sudan and southern Egypt, was divided into three kingdoms: Nobadia, Makuria and Alwa. Soba, the capital of the southernmost kingdom of Alwa was located at the heart of modern Sudan, at the confluence of the White Nile and the Blue Nile. Situated at a crossroads of the major routes connecting Ethiopia and the Red Sea, Kordofan and Darfur tribes, Eastern desert peoples, and the entire extent of the Nile valley, the city was probably a mosaic of cultures and ethnicities. According to Arab travellers, who visited the city over the thousand years of its existence, Soba was a vibrant, truly cosmopolitan city with envoys of major political powers finding their way across the inhospitable desert areas of northern Sudan to visit the kings of Alwa.

During archaeological fieldwork in Soba in 2019/2020 excavation season, 23 burials were uncovered at mound OS in the northern part of the site. Uncovered funerary features showed an unusual diversity in the manner of burial. A variety of burial practices may suggest that the deceased might have come from different backgrounds, representing various cultures, ethnic and religious groups. Preliminary analysis of observed diversity, in the context of previous archaeological research conducted at Soba, as well as various written sources, suggests growing cultural diversity towards the tenth-eleventh centuries AD. Bioarchaeological research conducted so far constitutes the first phase of a large-scale investigation of population diversity in the medieval kingdom of Alwa. 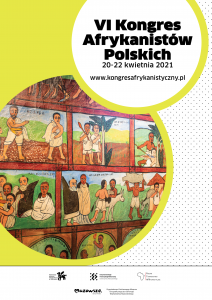 On April 20, 2021, as part of the VI Congress of Polish Africanists, three papers were delivered discussing the results of the research in Soba:

Dr Mariusz Drzewiecki and dr Tomasz Michalik presented research focusing on the oldest layers recorded during the fieldwork in Soba in 2019-2020. The talk entitled ‘The beginnings of Soba, the capital of the Kingdom of Alwa in the light of new archaeological research and radiocarbon dating’ was presented online during the conference ‘The Past has a Future!’ (23.03.2021). The paper with the same title has been accepted for publication in ‘Polish Archaeology in the Mediterranean‘ (scheduled for publication at the end of 2021). 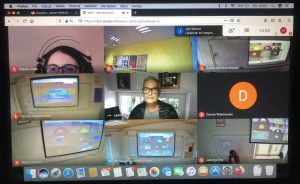 Prof. Maciej Kurcz is working to make a connection between schools in Soba and schools in Poland. On the 13 of October 2020, he had an online meeting with pupils from Juliusz Słowacki Secondary School in Cracow. He presented our research. Talked about people living in Soba and discussed possibilities for cooperation between the schools.

Dr. Mariusz Drzewiecki presented results of the first season of fieldwork at Soba during a seminary meeting at the Polish Centre of Mediterranean Archaeology of the University of Warsaw (22.09.2020).

On the 2nd of June 2020, the University of Silesia has published a lecture by prof. Maciej Kurcz talking on the ethnological research at Soba and the story of Ajoba.

On the 9th of February 2020, a presentation entitled “Soba Expedition – the first season of fieldwork” was made at the University of Neelain (Sudan). 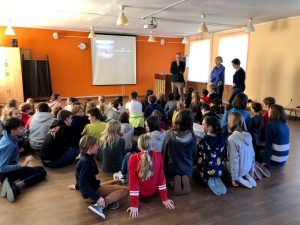 Prof. Maciej Kurcz on the 3rd of January 2020 had a meeting with pupils from Juliusz Słowacki School in Cracow. He presented our research, the antiquities, and talked about people leaving in this part of Africa.

Conference to Mark the Centenary of Archaeology at the University of Warsaw (9-13 December 2019, Warsaw, Poland)

A poster entitled “Soba – serce królestwa Alwy. Organizacja przestrzenna średniowiecznej stolicy nad Nilem Błękitnym” (Soba – the heart of the kingdom of Alwa. The spatial organization of medieval capital city on the Blue Nile) was presented. The abstract of the presentation is available below

100 years of archaeology at the UW – book of abstracts

A paper entitled: “Medieval architecture around African cities. Khartoum and Omdurman cities case studies” was presented. The abstract of the presentation is available below